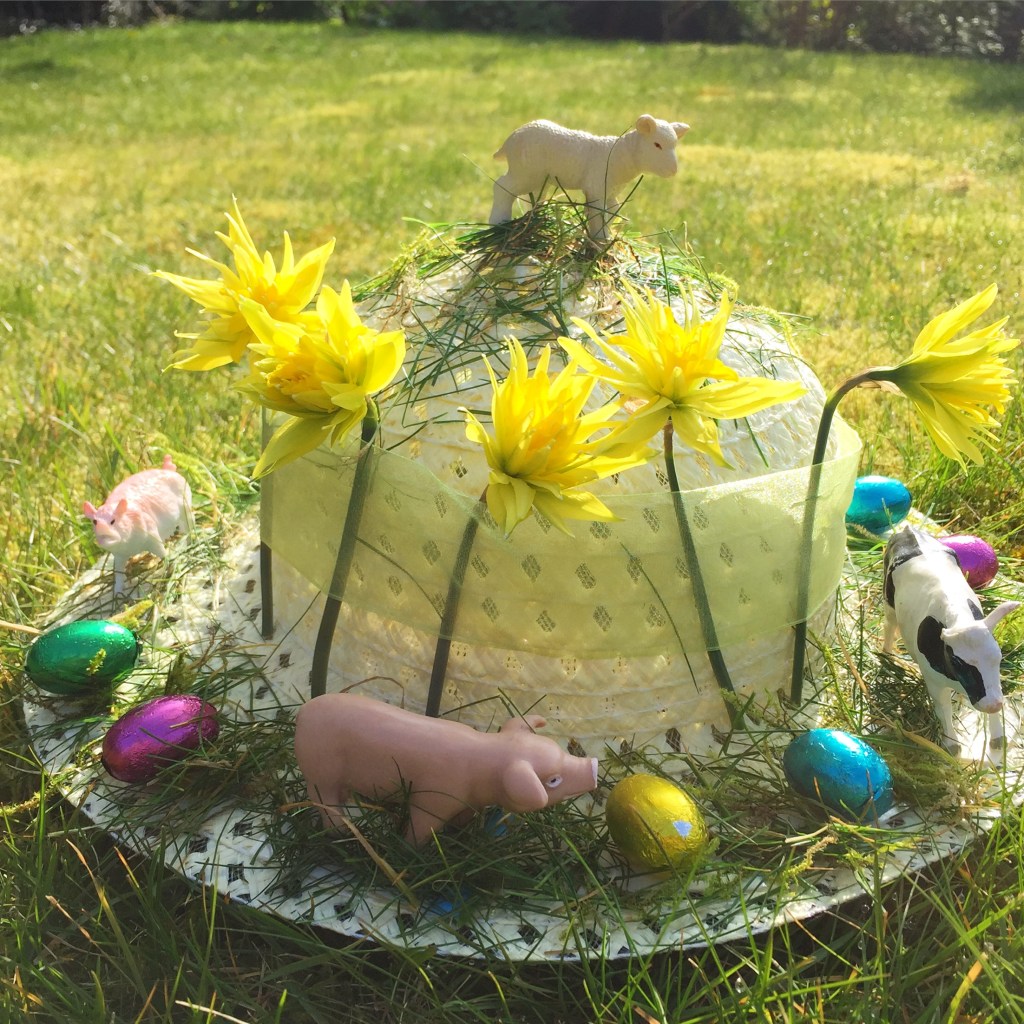 The one where I forgot to make the Easter bonnet.

I’ve forgotten things before: book bags, trainers, lunch boxes, the usual. But this one was bad. The worst.

As we came into school I noticed a child wearing his Easter bonnet. ‘Oh’, I thought, ‘he must be bringing his in early’. Then I saw another, “Were we supposed to bring in your bonnet today?” I asked my middle son casually.

He shrugged. I looked around fearfully. Everyone was wearing a bonnet.

I accosted two of my friends, hissing, “Were we meant to bring them in today?”

“Yes,” came their deathly reply. “They’re having the parade today. Are you OK?”

For I had turned a waxen shade of pale.

“I haven’t made one,” I choked out in a whisper.

They laughed in horror. “Can’t you rush home and bring one in?” they suggested.

I turned to my son, who was looking dolefully at all his school trooping by in their bright and beautiful bonnets.

“Darling,” I whispered, trying to keep the panic from my eyes. “I’m going to go straight home and make you a bonnet and bring it back in – shall we pretend we made it together?”

He nodded. “Remember the farm animals. And chocolate eggs,” he said and trundled into school.

“What time is the parade?” I asked my son’s teacher, with forced jollity.

“After break,” she said.

“I just need to pop home and get his bonnet,” I said.

I ran to the car, tears pricking with guilt. But I didn’t have time for a bad mummy meltdown. I had a bonnet to make.

I raced back home and had a calming Mini Egg before starting the hunt for materials. Luckily for me, I come from the “all the gear, no idea” school of crafting, so on the occasions that I am called to craft, I go all out on securing provisions. No ribbon shop is left unturned, no adhesive product unbought. I’d also had the foresight to buy extra bonnets last year, almost as if I’d predicted this moment.

A quick rifle through the newly-reunited farm animals (hurrah for me doing a partial toy sort-out last weekend!) and I found the requested beasts. In another stroke of quite unbelievable luck, my friend had brought the boys a bag of little eggs over the weekend and my oldest son hadn’t finished his.

In under ten minutes, I had assembled all the necessary doings. All I had to do now was choose my glue weapon and hope it would hold the animals and eggs for long enough to last the parade. Turns out Sticky Fixers are the ones for the job – I do recommend should you ever find yourself in my position. But they have this blue tab at the end that looked most unsightly in my pastoral scene. I began to cut them off before applying but the ones I’d already put on couldn’t be snipped in situ. I had to think fast. I looked into the middle distance.

And saw the lawn. Of course! Grass!

I ran out and picked a load like some kind of crazy harvester type person.

But it was soaking! The morning dew glistened in all its beauty upon every blade and time was running out. Without hesitation, I put it in a bowl and microwaved it. Yep, I microwaved grass. It stank to high heaven, but it got dry. I sprinkled it liberally over the bonnet, tucked a few dwarf daffodils in the ribbon and hared it back to school.

Long-term readers of my blog may recall this time two years ago, where I shamed myself by shouting in triumph when my oldest son won the Easter Bonnet competition (this is when they announced it in front of the parents at assembly – and perhaps I am responsible for the change?). That bonnet he made himself, with a small bit of technical help from me – he couldn’t be expected to sew a Lego base on a bonnet, could he?

This year, I have no designs on the prize, and it would be dishonest to accept it since my son hadn’t even seen his bonnet before the parade. But I don’t care. All I care about is that I didn’t let my son be the only one without a bonnet. I nearly had a heart attack, but my little lamb knows I love him enough to microwave grass – and back. 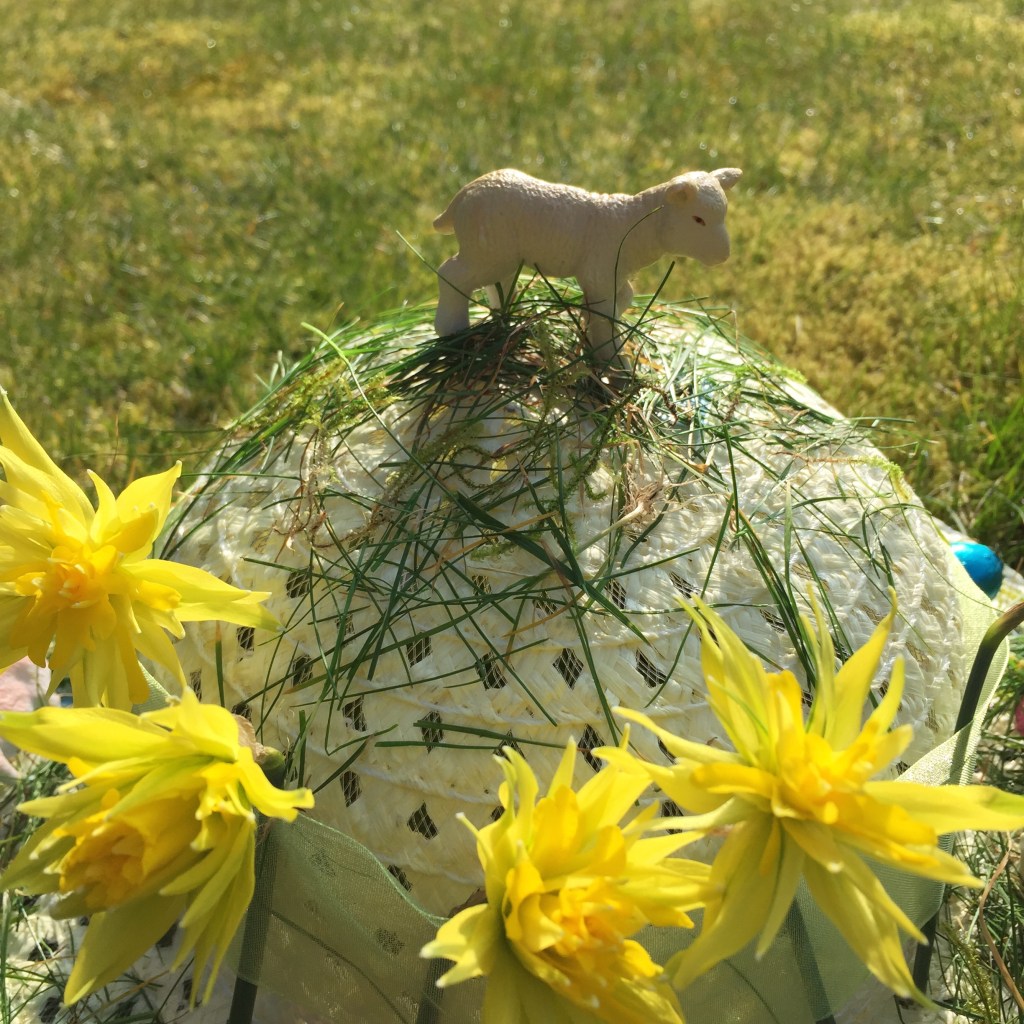