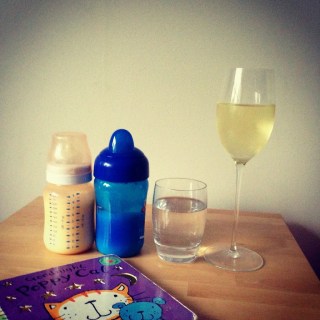 It’s that time again. The time I’ve been thinking about ever since I woke up. Baby bedtime. Tonight I will do it right. I will get them to bed by 7pm, have an evening that is both productive and relaxing, then retire to bed at a sensible hour and not wake up feeling like this.
But I haven’t got a chance. I have nothing left at the end of the day; the kids have a whole arsenal:
1   The Top Step Turbo Charge. No matter how tired they are, when they hit that top step of the stairs, it invests them with more energy than you could ever dream of. It doesn’t matter what you threw at them that day – school, football in the garden, swimming with dolphins off Iceland – that bionic boost will fire them up just when you least want it.
2     The Snack Hijack. You are cleaning their teeth. They announce they are starving. Not just hungry, starving. They actually cry and/or hold their poor cavernous tummies. You are paralysed. They ate a good tea, and had a bedtime top-up, so they can’t be hungry. Or can they? The good mother in you rears her righteous head: “What! Send them to bed hungry! What kind of evil witch are you?”  You go and get them some ricecakes, sigh over the crumbs and the double teeth-clean, but your conscience is clear. They smile to themselves.
3     The 7pm-8pm Vortex. You can be primed, kids in PJs, teeth done, their eyes (despite themselves) drooping, sitting on the bed about to read a story at 7pm. You feel pretty smug. Three stories, kiss on the forehead, downstairs by 7.15pm – done! But then, the Vortex opens. It has no mercy. It can sense a parent desperate for a break and it will gape its all-encompassing jaws and swallow time. That hour will be gone.  It is beyond your control. How does this happen? Here’s some ideas:
4     The Sibling Sabotage. This happens to me every single night. I settle the older two down with their milk and that most beneficent of babysitters, Daddy Pig (father of Peppa), and sneak off to put the baby down. He is exhausted – has been for ages but I was too busy rugby tackling the big ones into their pyjamas to put him to bed. Besides, I still inwardly cling to that yet-to-happen theory that the later he goes to bed, the longer he will sleep in the morning. Ha. So, he is glugging his bottle, going slower and slower as he gets more and more sleepy, and I am lying beside him, relishing for just one special minute a chance to devote all my attention to him. I’m just doing the upright burp-snuggle, when the siblings burst in, whooping with bed-jumping hilarity. No matter how many times I vividly explain that every minute they prolong the baby’s settling time, is more time they have to wait for me to come and do stories, they just can’t help themselves. The baby is wide awake and I am fizzing with frustration.
5     The Deep Chat. You are always complaining that you have no idea what your kid does at school. Well, why worry? Just as you’re drifting off on their bed, they will suddenly come out with something like, “Mrs Sharpe uses her cross voice at me all the time.” You know in cartoons when someone gets an anvil or a grand piano dropped on them from a very great height? It’s like that. The bulging floodgates of guilt burst open and you struggle not to cry. You are just trying to get at what is going on in your darling child’s life, aware that this tiny window of opportunity will dissolve in an instant, when another child sidles in, wondering where his bedtime kiss is. The window snaps shut.
6     “I Feel Sick.” Game-changer. However angry you are, you have to totally backpedal to take account of this new information. And they know it. You are 99% sure they are not really going to be sick, but you still have to play the game. They’re not being malicious, but they do know that claims of feeling sick are the quickest way to get nice mummy back, even though she is crying inside at the further delay to downstairs time, and the thought of a more-disturbed-than-normal night. By the time you have tried them on the toilet (a poo! surely the answer to every abdominal complaint), given them water, assembled the sick bowl and covered the pillow with a towel, you feel a bit sick yourself.
Eventually, I extricate myself and go downstairs. As I hit the last step, I feel lighter and suddenly energised – the mummy equivalent of the top step turbo charge. The whole fiasco has taken three hours, but it is over. By the time I get into the kitchen, though, I am already feeling guilty – for snapping, for shouting, or just for wishing them asleep. After all, all they want is all of me. All at the same time. Is that too much to ask?
I embark on a whirlwind of dinner preparation, brushing-off of uniforms and tidying up. As long as they don’t come downstairs again – which makes me feel like hitting myself with a frying pan – I can now try and enjoy my evening.
All twenty minutes of it.