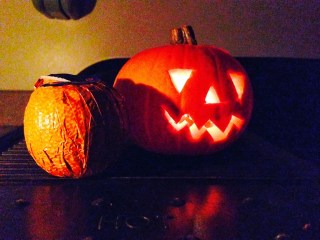 There are few things more frightening than having something unexpected in your mouth. So imagine my horror when I gleefully popped in a segment of Terry’s Chocolate Orange, only to discover it was the Popping Candy abomination. It was an outrage! It started as an Alka Seltzer-esque fizz, then ramped up to a shaken Coke, before culminating in a fireworks display in my fissures. It lasted for about three terrifying minutes – it felt like the galvanised sugar was literally exploding its way into my molars.
Through my foaming mouth I castigated my husband for his poor choice. We’d been in WHSmith and he’d grabbed a Chocolate Orange, of which, unseasonal though it was, I fully approved in principle but saw he’d inadvertently picked up the dark, so made him put it back, only for him to – in his panic, I saw now – grab this new version. I only had myself to blame, but this was a punishment beyond compare. My fizz threshold begins and ends with Refreshers; I can go no more hard core than that. My face must have been like my baby’s when I tried to feed him the pumpkin that I carved out for Halloween last night.
Don’t get me wrong, I LOVE chocolate. I eat the squished bits off the back of the car seat. And I’m not against novelty chocolate. Trying it anyway. Halloween is, after all, one of the key times for a reworked chococlassic. I’ll buy anything once, but it takes a lot for a new innovation to earn its way into my stable of accepted chocfare. The last one that made it in was Cadbury’s Freddo Faces, but before that it was Galaxy Minstrels. As you can see, I like to remain current in my chocolate knowledge, but I will not be made a fool of.
Terry’s, I will eat your Milk Chocolate Oranges till my last Christmas on this earth, but when it comes to your popping candy, you might trick me once, but I won’t let you trick me twice.