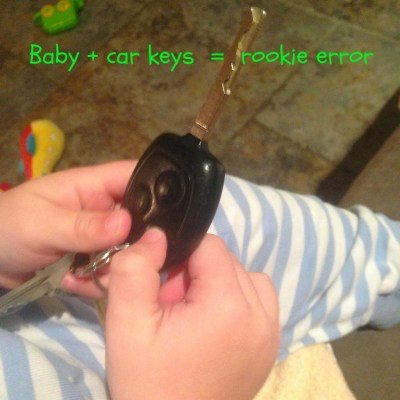 There are some parenting mistakes you make time and time again. Taking them out for a meal and expecting not to get indigestion.  Assuming they heard you the first ten times you asked them to put their school shoes on. Expecting them to have a two-hour nap as you have loads to do. Telling the babysitter, “They definitely won’t be sick, have a nightmare, spike a temperature or wake up in the 79 minutes we are out of the house.”
But there are some that you really only need to make once to learn your lesson:
1.  Fastening a nappy on a baby boy with his wee man pointing up. Two words: wet neck. Or, indeed, fastening his nappy too slowly.

Nothing like a wee in the face to initiate you into the world of parenthood.

4. Shaking a bottle of Calpol with the lid not properly on. The Holy Grail of parenting it may be, but it is the stickiest stuff known to man. And it stains.

5. Wearing a skirt to soft play. Think you can just sit and drink coffee while the children romp? No, you will be up there, crawling through the tunnels, basically flashing the dad behind you.

6. Thinking silence is bliss. They are up to something.

7. Taking a child with a stomach upset in the car. Sometimes you just can’t help it, but that is a school run with a hefty price tag, as anyone who has delved into the inner crevices of a car seat will know.

8. Doing nappy-free time when your baby hasn’t pooed in the last five minutes. And 8b) Not noticing that your little treasure has made a deposit till it’s too late. Never bath a baby barefoot.

9. Not bothering with a bib. How can bolognaise stain, right?

10. Putting a child in his special occasion clothes more than 30 seconds before the happy event.

11. Shaking a baby’s bottle with the collar unscrewed. Or without that so-called magic anti-colic ring.

12. Letting the baby “look after” your only set of car keys. Which also has the house keys on. When you were due at the doctor five minutes ago.

13. Thinking they’ll last till the next service station for a breast-feed. You will immediately encounter standstill traffic. Trying to feed a baby while they’re still in the carseat is a contortion too far (believe me, I’ve tried).

14. Putting your hand under the bubbles in the bath without checking for ‘submarines’. A child’s ability to stealth-poo is without parallel.

15. Going on a very windy road with kids in the back.

16. Taking baby’s swimming nappy off without realising that bulge is not just pool water.

17. Giving a baby a whole bottle of full-fat milk when he’s just recovered from a tummy bug.

18. Picking up the puzzles “later”. Those colourful little pieces will never be reunited again. Till you move house. If you’re lucky.

19. Letting your child eat a whole punnet of grapes while out shopping. They’re a laxative – who knew?

20. Believing you couldn’t possibly love them any more than you already do.
Like me on Facebook!
You may also like: ‘Parenting: Then and Now’. Then: baby bent over. Now: he does baby yoga.