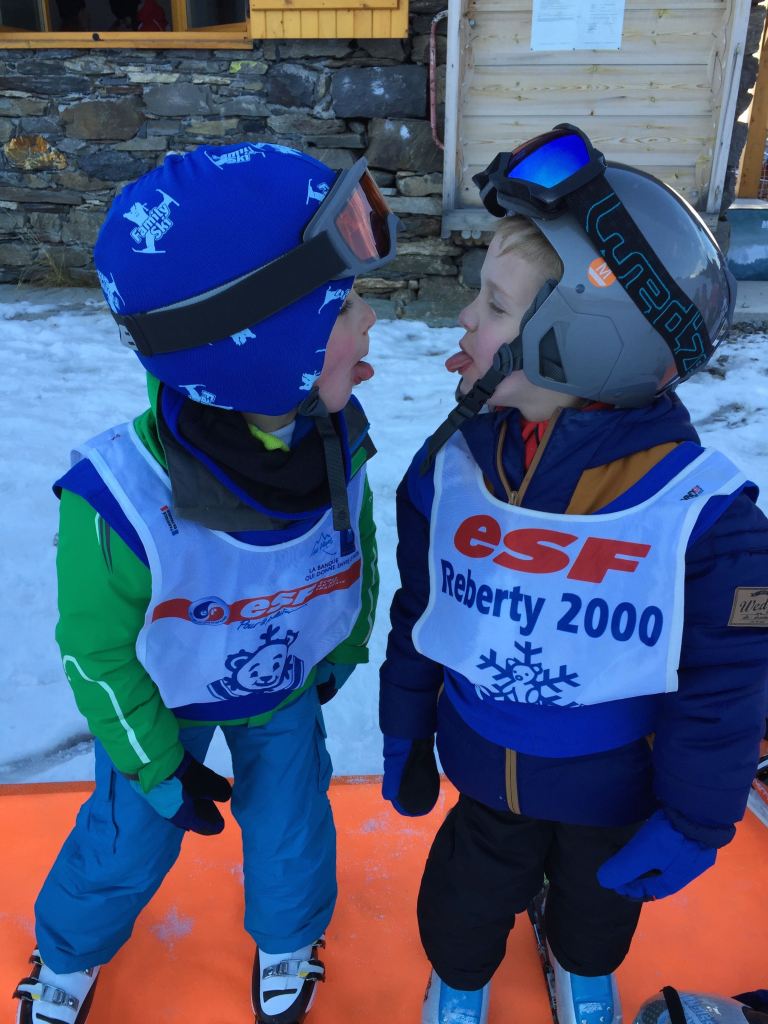 Desperate to get back on the slopes but now have a baby (or two) in tow? When’s the best time to start your child skiing?

Children are never too young to take skiing – in fact, we took our first child skiing when he was a foetus. Purely by accident, of course – I didn’t realise I was pregnant till we were already on the slopes.

Cue me legging it to the pharmacie and performing a comedy mime act where I asked for “un test de” *big belly sign with my hands* in front of a shop-full of skiers. The perplexed assistant finally cottoned on: “Ah, un test de grossesse!” she exclaimed loudly, handing me my first ever test. My first brush with the pregnancy world and already I’m being called fat!

So no more skiing for me that week. Skiing is not advised during pregnancy, for safety reasons, but also common sense – leaning downhill with a large bump is only going to end in a face plant.

As soon as your baby is born, you can take them on a ski holiday.

How much skiing you actually get done obviously depends on your childcare arrangements, how willing you are to leave them and whether you’re breast-feeding (i.e. have time to do a run between feeds).

And of course, whether you can muster the energy to get down a slope. For the first year of my babies, the thought of voluntarily throwing myself down a mountain rather than having a nice nap was physically and mentally untenable.

However, if you want to ski with a small baby, there are a range of family-friendly ski companies that offer childcare for all ages. At the UK’s No.1 family ski company Esprit, nurseries take babies from 17 weeks, where they will be cared for by qualified British nannies or nursery nurses.

So what’s the youngest they can actually ski?

Three is the age when ski instructors generally find they can start to teach skiing. Anyone who has a two-year-old will agree that though they have many wonderful qualities, listening to and obeying instructions, concentrating and having an attention span longer than a few minutes are not among them. Of course, you see the little French toddlers bombing down the slopes, but it’s different when you are brought up in the Alps.

Our youngest is turning three a few weeks before we go, and I think he will be ready. In the youngest ski groups (cutely dubbed Spritelets at Esprit), the morning is mainly about getting used to wearing ski boots and getting the feel for skis on the nursery slopes. I’m not expecting to see him doing a red run by the end of the week, but to have gained snow confidence and – most of all – to have had loads of fun. If you’re not tied to school holidays, Esprit run special weeks aimed at young families, which are ideal if you want to go skiing with babies and toddlers.

Four year-olds really take to skiing, being that little bit older, and having started school, so they are more used to taking instruction, waiting in line, and concentrating. Plus they are physically stronger and likely more able just from being that year older. Last year, on our first family skiing holiday, our middle son was only just five and most of the group were four, and they were astonishing! They pick it up so quickly and they’re so brave.

No age is too late! Although it is great to start children skiing young, it is never too late to take them, either. Ski lessons are offered for children up to the age of 12 by Esprit, after which they can join an adult class. Lots of teenage children take lessons with their parents, which is a nice option. I didn’t go skiing till I was in my twenties, so my oldest son (age 7) is already better than me – but that doesn’t stop me loving it.

The No. 1 rule of skiing with children – don’t let them get cold!

Your child may be having the time of his life, but if his fingers and toes start to get cold, it becomes a disaster. Thermal socks and gloves, preferably with inner gloves too, are essential even when the sun’s out, as the extremities always get freezing in the snow. The Essential Ski Packing List will be coming soon on the blog.

So if you’ve got the ski bug, don’t let your children stop you going, whatever age they are!

Disclaimer: I am delighted to be working with Esprit. All views and images are my own.