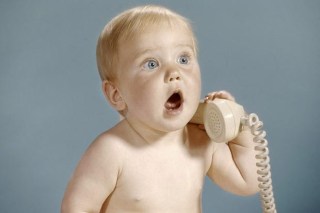 What’s the big rush with the talking? Your baby’s first words are a huge milestone, a joy and the beginning of an ongoing dialogue that will continue for the rest of your life. But your conversation with your baby starts as soon as he is born  – conceived, even. With two older brothers barraging me continuously with words, I’m quite happy for my baby and I to remain a bit longer in pre-verbal bliss.
Words: The Cons
Showing You Up: When my baby is pointing at the Chupa Chups lollies in the chemist, yelling insistently, I smile to the lady saying, ”Oh, I think he likes your brooch.” I know perfectly well he is saying, “Buy me one of those teeth-rotters on a stick like you always do or I am going to start sweeping the piles cream off the shelves.” But she can’t prove anything.
Telling Tales: I have, on a number of occasions, made the frankly unbelievable error of commenting on a teacher, kid, or – worst of all – fellow parent to my child completely forgetting that they can talk. Ludicrous, I know! I’ve had a talking junior in the house for over four years yet somehow can’t keep it in my head that they can, will and have repeated said slur to the offended party. Fortunately, I am a very nice person and never say anything too bad. Out loud.
You Know What They Want: As kids grow older, I find that most things they want are things that I am compelled, as a responsible steerer through life, to say no to. If your child can’t verbalise his request, you can just bundle him up and go, “Oh, you just wanted a cuddle with your mummy, didn’t you, precious?” However, with pesky words you have to formulate different ways of saying no to their infinite requests: chocolate fingers, the second Lego Death Star, the IPad, that annoying pal of theirs coming on a playdate, chocolate fingers, staying up for ten more minutes…
Words: The Pros
You Know What They Want: Pointing, signing and yelling can get a baby far – you just keep offering them something till they stop shouting; it was obviously that that they wanted. In my youngest baby’s case, the eyebrows have it. There is more expression in those babies than a dictionary. As kids get older though, words are going to help speed up the elimination process. And filling in their UCAS application.
You Hear What They’re Thinking: As your child gets more sophisticated in his thought processes, it is your privilege to hear what is going on in their little brains. This is a time to be cherished, as it won’t be long before they start to edit what they say, and that wonderful window into their mind closes a little. I am trying not to think too much about that and instead relishing their “say what you see” approach.
They Help You Be President: I’ve got high hopes for all my kids. Reading, education, securing a global position of power – they all start with that first word.
They’re So Funny: My four year-old jubilantly announcing in a public loo that he has done the “Poo-lennium Falcon” may not be socially acceptable, but it did crack me up.
My Baby’s Likely First Words
My tot is 19 months, so he’s saying a few words already, but not in a very consistent way. At this age, with my first two children, I was so keen to hit the next milestone I was gurning at them all day long making exaggerated sounds for them to copy. But with this baby, my last, I am in no such rush. Most days he says nothing but “Uh”, with varying degrees of emphasis, for everything; then he’ll have a day when it honestly sounds like he said “kaleidoscope”.
My baby already has the two-word phrase “Uh oh”. This was both his brothers’ first phrase too, which says a lot for their Calamity Mum. But, like them, he totally misuses it to comment on his quite deliberate acts of sabotage. Such as repeatedly using his bolognese as shampoo.
While we are still in Pre-verbal Bliss for now, I know we’re babbling at the edges of the sea of words that will any day now flood into our lives. So what is likely to be his “real” first phrase? Well, it depends who he gets it from:
“It’s not fair!” – oldest brother.
“’Nother Octonauts!” – next brother.
“Great kick!” – his father.
“Where’s the flipping REMOTE?” – me.
“My gorgeous, precious, clever, wonderful angel baby,” – also me.
I’ve got a horrible feeling that his first phrase will indeed come from me, but it won’t be either of the above. I just hope we’re not in public when he comes out with:
“ ’ck’s sake!”.
Related posts
I’ve been going on about not wanting my baby to grow up yet quite a lot recently:
Dear Dummy Fairy – a letter asking the dummy fairy to flit off to Neverland.
I Love The Way Babies – a soppy poem.
Picture source: Getty Images