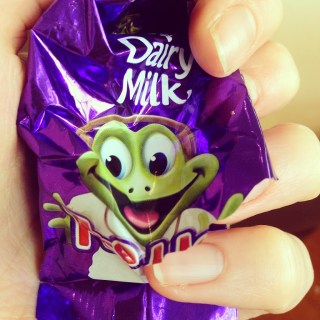 Every relationship has its ups and downs. I guess I should be happy ours has lasted so many years. But he has done something unforgivable. Is this the end for me and Freddo?

I love Freddo. Everyone knows that. But something happened this week that I’m not sure I can get over. It wasn’t exactly his fault. But I’m going to blame him anyway. 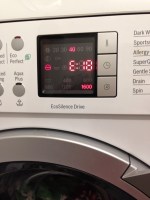 So, my other big love is my washing machine. OK, who likes laundry? But we have to do it, so to have a friendly, functioning washing machine is the underpinning of any mum’s sanity. That 15 minute rapido wash has got me out of hot water many a time when I’ve uncracked the PE kit from its muddy confines on a Monday morning. But a few days ago, it turned on me. Wash after wash was interrupted by an angry triple beep and scary warning sign. Which I ignored, switched off and on, set to spin and parked it for my husband to look at. He did, a day or so later. He emptied the filter, all was well.

Except it wasn’t. The next day, the same thing happened. Nefarious activity was afoot. The laundry mountain was higher than me. Pant stocks were running low.

My poor husband again spend the evening knelt by the washing machine – though to be fair, this is where I spend most of my time so I’m not too sympathetic. At about 11pm, he came out, smiling grimly. “Do you know what it was?” I shook my head apprehensively. “THIS was stuck up the detergent pipe.”

Reader, it was a crumpled up and thoroughly washed…Freddo frog wrapper.

But I guess Freddo might say in his own defence – well, you do bite my head off at least once a day. 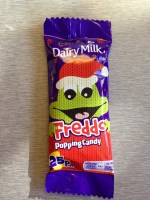 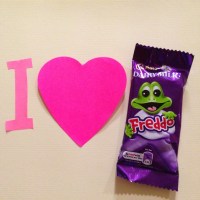 The Mummy and The Frog – A Love Story My Valentine to the girthsome little fellow.
Trick or Treat: When Chocolate Goes Fright Night
In which Freddo allows himself to be despoiled by the terror that is popping candy. I forgave him – but only just.