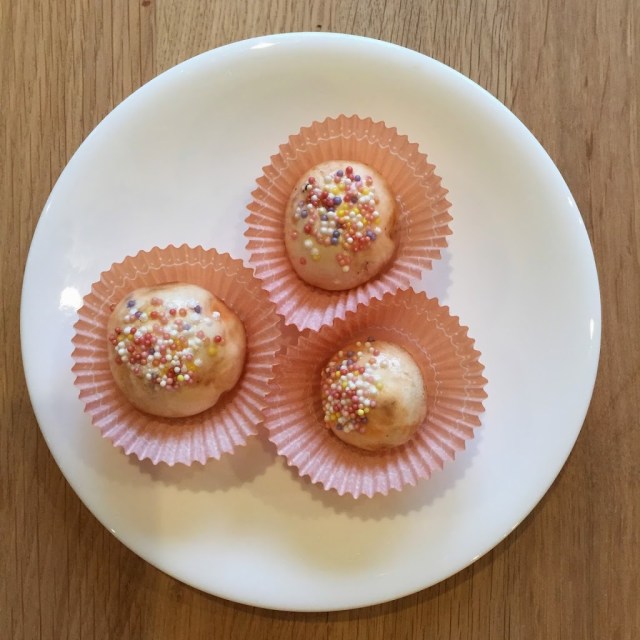 Kids lick the icing off cakes. Fact. Some may eat the cake too, but there are many, like mine, who would go through a whole tray of cakes if they could, just skimming off the icing with their little filter-feeder mouths. So I got to thinking, as we were baking the other day, what if I just iced – something else? Like a stone.

Would they really lick the icing off anything – even a rock? But then one of them would probably crack a big tooth and turn my little experiment into a disfiguring reminder of my guilt forever more. I don’t know how it came to me, but I thought – a mushroom! It’s the right kind of shape, I had some in the fridge – and the kids loathe them!
Some claim that life’s too short to ice a mushroom, (I paraphrase) – but actually, for parents, I find there are lots of little pockets of time where you can’t really get anything particularly useful done, so you might as well do something silly and ultimately pointless.
Like when they’re playing nicely, which you know won’t last a nanosecond if you start putting away laundry, for example, so you start straightening up your ancient jam and pickles area in the fridge. Obviously there is not enough time to make the momentous decision to finally part with a kindly gifted homemade preserve, scrape the (probably very mouldy by now) contents into the bin and wash out the encrusted jar for recycling. Or when there is two minutes till the pasta is ready and you have squandered the other eight doing who knows what, but you can’t really capitalise on those two minutes because it’s too short a window. So you hover paralysed by the stove, vaguely thinking, “Will I ever move out of this sink-stove vortex?”
But that ten-minute lull between the children finishing a meal and asking for “something to eeee-at” is just long enough to do something daft. And there was the leftover icing just sitting there. So I did indeed ice a mushroom. Three, in fact.
How did I make them stand up so they wouldn’t drip everywhere, I hear you cry. I stuck ’em in a basil pot, of course. 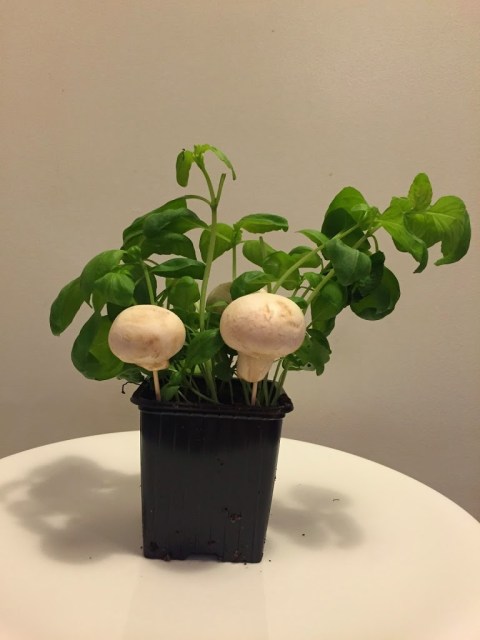 I scattered on some hundreds and thousands for good measure, enjoying myself surprisingly much – amazed and amused at my own idiocy.
I popped them in the fridge to set and closed the door, rubbing my hands together a bit like Mrs Twit in Roald Dahl’s classic tale of domestic prankery. “The look on their faces when I tell them they licked a mushroom!” I thought to myself, tittering inwardly.
But as if to punish my lunacy, those lurky mushrooms wiped the smile clean off my chops. When I got them out again, they had – there can be no other description for it – spitefully drunk all the icing. So instead of a nice set glaze to trick the children into mouthing a mushroom, there were just some sorry hundreds and thousands clinging on to a revolting sticky mound. Porous little pesks. Needless to say, the children clasped their hands to their mouths making vomiting noises as soon as they clapped eyes on them.
The moral of the story?
Be thankful to your children, for they give you the interludes
you need to be creative.
or
Don’t ever think you can fool your kids.

Speaking of people who just lick the icing off cakes,
a very happy birthday to my darling sister!