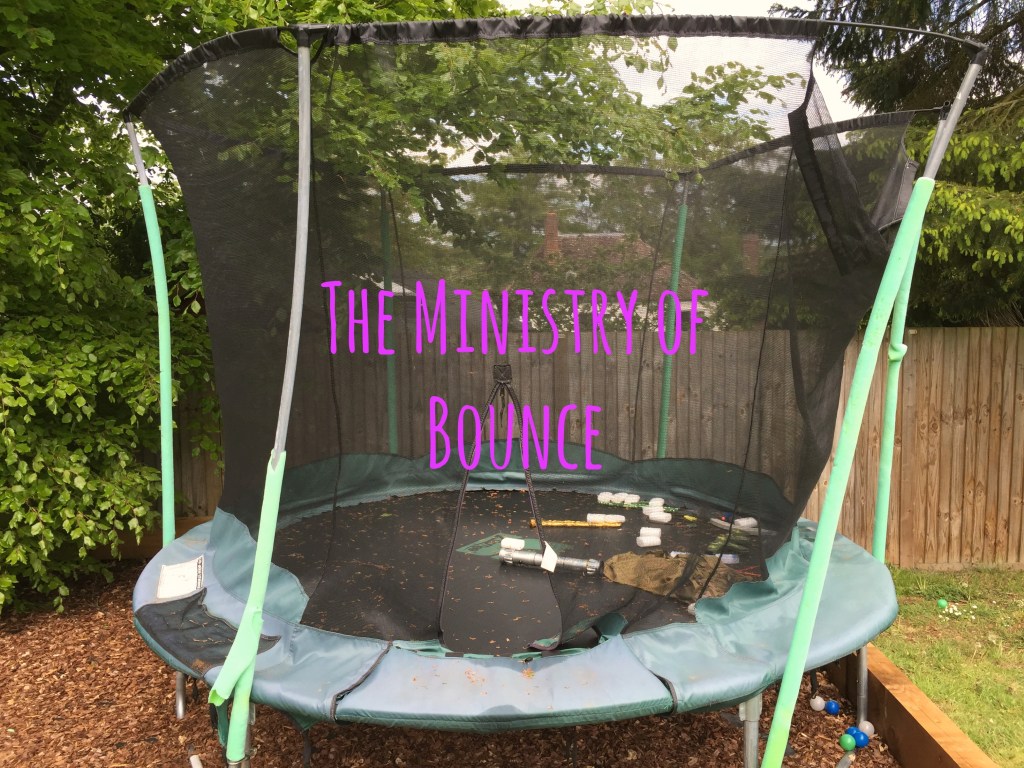 Harmless bouncy fun or arena of doom? The jury’s out on trampolines in our garden. Do your kids manage to play nicely on the trampoline or is yours a pigeon-poo-stained mosh pit like mine?

“ONLY ONE PERSON AT A TIME” shrieks the manufacturer’s label.

Who are they kidding? The rows that would ensue if I tried to enforce that rule! The whole point of the trampoline is that the kids happily bounce while I wash up at a safe distance, smiling through the window.

The time I spend going in and out adjudicating arguments and administering “there, there” rubs to injured body parts, I might as well sit out there on a chair operating a one-on, one-off system like a fairground lady.

But that defeats the object. It’s my washing-up time. And their “free play” time. They’re meant to be exploring their physical abilities, letting off steam, using up energy. Having fun.

They loved it when I taught them all the moves: tuck, pike, straddle, star, seat jumps and (low down) somersaults. They used to enjoy just plain old bouncing, just trying to see how high they could go.

But now it’s evolved into a wrestling ring. I have three young boys and they need to use up a lot of energy (as, I expect, girls do). So it’s no bad thing, and they’re gentle, really.

But they’re in a giant bouncing ring.

The Democracy of Boing

The trampoline is the children’s mini-universe. An enclosed space where they rule.

When I hear the screams, it’s hard to distinguish whether they are exhilarated whoops or yelps of pain. Particularly through a pane of glass.

But I read recently that it’s beneficial to let siblings sort out their own spats instead of always weighing in. Equally, you can encourage imaginative play by taking a step back and leaving them to their own devices.

And my boys do often play nicely for ages, making up games, bringing props onto the trampoline to create their little world. Like, er…weapons. 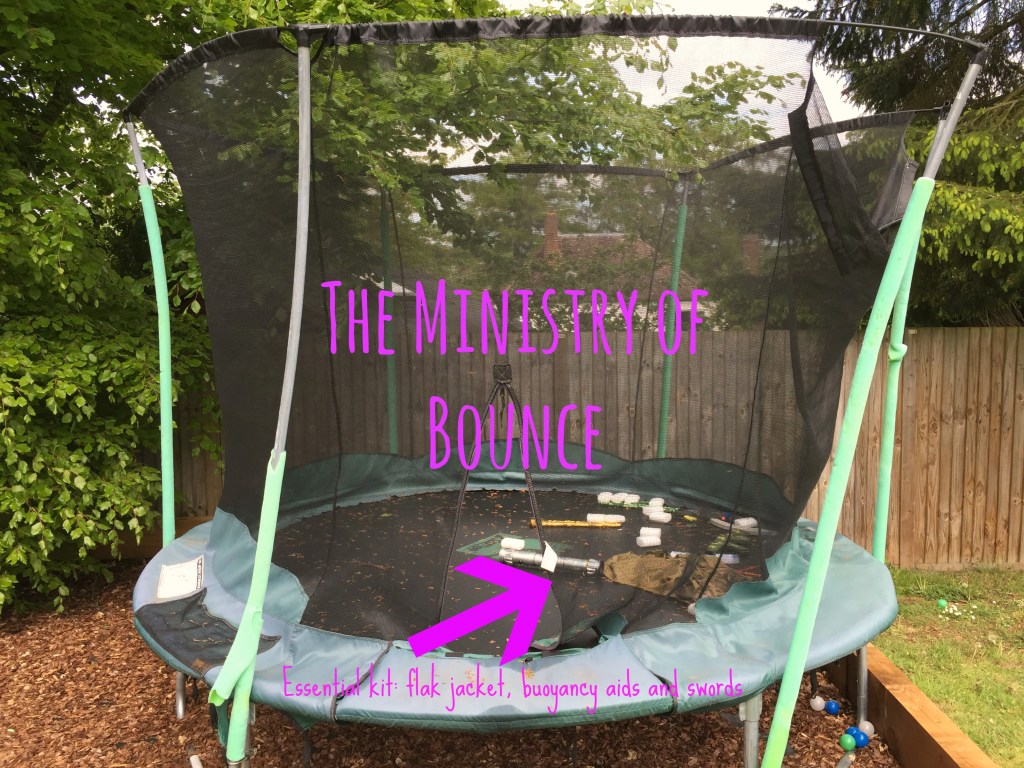 They may spat like mad on the trampo, but try and get them off, and they move as one to the far side of the wretched thing, and huddle there thick as thieves, laughing in the face of my ineffectual pleas and arm-swipes. I feel like Winnie-the-Pooh sticking his paw in a hole in the tree full of giggling, sting-quivering bees.

I have two choices: shout at them like the child-catcher. And risk the neighbours’ censure.

Or get on and bodily remove them.

And then I’ve walked right into their trap.

There’s no such thing as a dignified walk on a trampoline.

One has no authority on an unstable surface.

So there we are, manically bouncing up and down, the kids fighting over who gets to hold my hands, everyone giggling themselves sick.

Them all the more so, as they know my pelvic floor is no match for their exuberance. Within minutes I’ll be running urgently inside, leaving them to their crucible of chaos, and the tea to get cold on the table.

It is a fulcrum, yes. Not just of bickering and bruises, but of creativity and comradeship.

So I guess I’ll bounce to that!

Just let me go to the loo first…

BIBs voting closes tonight (Friday May 15th) at midnight – please vote me into the final for Family (category 13). Thank you!

I’ve been nominated in the MAD Blog Awards for Best PreSchool, Best Schooldays and (incredibly) Blog of the Year – I’d be very grateful if you could add your vote in any of these categories. Deadline is May 20th. Thanks again!