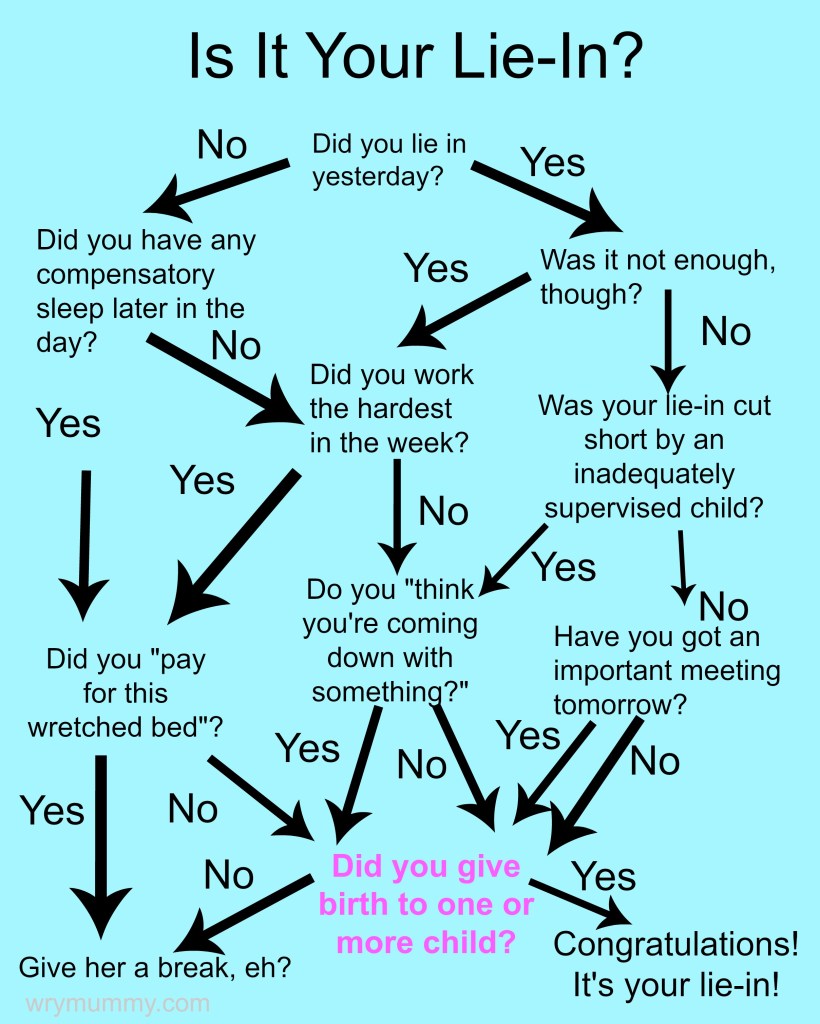 A bank holiday means one thing: a lie-in. But whose? Maybe you had Saturday and your partner had Sunday or vice versa. But who gets the bonus snooze? Use my handy flowchart to decide!

Money, housework, sex and kids are the most common causes of arguments between couples, science says. But I’d like to add the unsung anti-hero of marital discord – surely the most heated topic of every weekend: The Lie-In.

The Holy Grail of Parenting.

The only thing that makes another day with the babies bearable.

We haven’t got a newborn any more. but ye gads do we get woken up a lot. Only a couple of nights ago, we had not one, not two, but SEVEN wake-ups, spread at hourly intervals by our considerate three. Two each and one for luck from the baby.

We’re definitely a couple that need their lie-ins. We have tried both getting up and it’s a miracle our marriage survived.

On normal weekends we have a civilised quid pro quo, where one of us gets up on the Saturday and the other on the Sunday. It works. But on bank holidays, the gloves are off. Who deserves the bonus bed time?

Is it the one who got up in the night?

The one who had the shortest lie-in of the weekend (oh yes, we keep records)?

The one who has a hard week at work ahead of them?

The one who carried three babies for nine months and brought them into the world?

Just to make it fair, I drew up the handy flowchart above. It’s based not just on our own “discussions” but on a very scientific survey I conducted – amongst a few of my mummy mates.

Does it work? Well, put it this way. My husband had the lie-in this morning…

Sound familiar? Does the “I went through labour!” argument work for you?

Can you name the 1980s Clive Anderson show referred to in the title? Answer in the comments and I’ll send you a virtual tube of Smarties.

I am honoured to be on the BritMums’ Brilliance in Blogging awards shortlist for Family. If would like to vote me through to the final, I’d be delighted. You can vote in all the categories here.