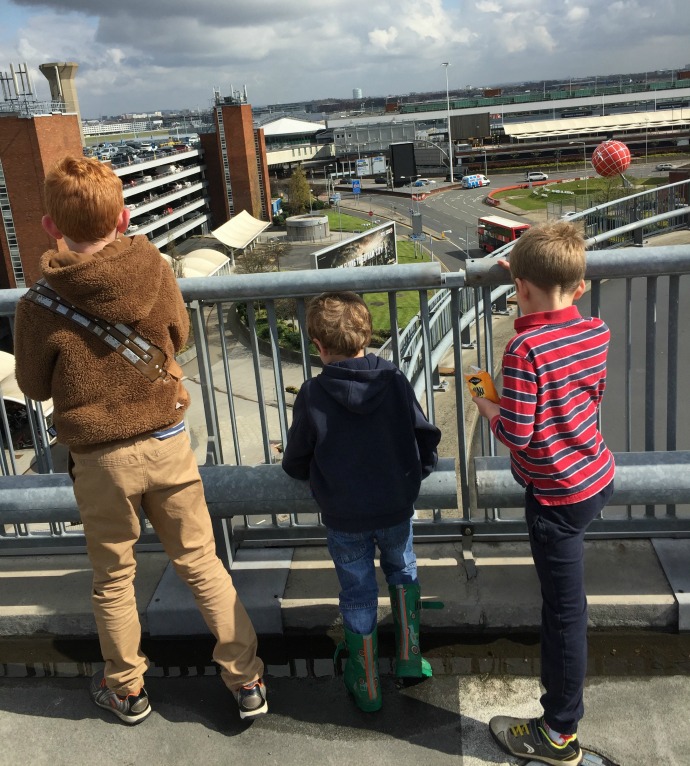 With parenting, does one size fit all?

“Put your shoes on! Clean your teeth! Hold my hand! Watch Numtums! Give me the square root of 169!”

Such are the commands that spill from my mouth daily in swift succession, aimed collectively at my sons, ranging in age from 3 to 8. But none of them is capable of doing or inclined to do all of these things. The poor lambs receive my barrage of instructions with a mixture of indignation and bemusement. Numtums is “babyish” to the oldest, while the youngest will hold my hand all day but he can’t put his shoes on yet.

Ever since one baby became two, they as a pair became “the children”. “The boys”. “The kids.” Insidiously, we had ourselves an Us v Them situation.

Then number three came along and they were a full-on gang. As soon as he could run around and speak / yell, he served to swell the number of Them. Luckily, they all get along really well – almost too well, to the exclusion of their dear parents.

What’s the collective noun for children? I’m sure we can think of a few at tense times – but for mine, I think a “rumpus” is pretty apt.

So this rumpus of children roams the house like a merry pack, flowing like water into every naughty cupboard and pocket of tidiness we possess. I mostly feel as though I’m standing like a big fun-spoiling rock in the middle of them, calling out commands in the hope that one will take.

It came home to me the other day when I told my youngest to finish his book by himself as I had to go and read to the next brother.

“But I can’t read!” he said, his voice wobbling with dismay and disbelief.

The poor angel. In my defence, he had already had a number of stories, but the point is – I am totally guilty of expecting too much of him, because he has older brothers.

“Don’t shout at me!” he wailed in surprise the other day, when I turned onto him the “strong voice” I can’t help but use with his oldest brother sometimes. I felt terrible.

One maternal voice obviously doesn’t fit all. But in the frantic whirl of everyday family life where people have to be got out the door or into bed, it’s not so easy to modulate your voice as you should. Ideally, I wouldn’t shout at anyone, obviously, but snapping at the oldest boy because the littlest has just taken his socks and shoes off AGAIN is clearly unfair but hard not to do in the heat of the moment.

People always say that they grow up quicker, subsequent children – and it’s true, I suppose, but not something I especially want to condone. But I do so every day. Yes, he probably should practice putting his own shoes on but I shouldn’t expect him to do up his own buttons or count reliably past 10. Neither should I expect him to finish a plate of food the same size as his big brother’s, but I just give them all the same on auto-pilot.

The reverse is true, too. My oldest son is 8 and a half, and bats me away if I try and hold his hand across the road. When I say, in excited tones, “We’re going to the park!”, he groans. With a shock, I realise that he is getting bored of our park (not all playgrounds, but our local one, which he’s been to a million times, and is not really challenging for him any more) – just as his littlest brother is finding the physical strength and agility to really enjoy every bit of equipment.

And then there’s my middle child, who can probably more or less perform all I ask of them as a group, but would probably appreciate me being a bit more focused in my delivery. He copies his big brother in so many ways, claiming as boring or babyish things that I know he’d lap up if he were just him, while he envies his little brother for being the babied one of the house.

We went to the movies at the weekend – I took the 3-year old to Zootropolis (good but right over his head) while down the popcorn-strewn corridor, our oldest two were with their dad, watching The Jungle Book (“it was EPIC!”). The ‘Them and Us’ is shifting to the older two plus parent vs the youngest plus parent. It makes me think that treating them all the same at least kept us all together. Simple, if not effective.

It’s not just their age either – everyone is unique and all that, and their mums should treat them that way, not just how they treat their big brother or younger sibling. I don’t know if it’s just me who finds their children collectively to be like a wall of water into which my words fall as effectively as drops in an ocean, but I need to start picking them off with individually-tailored words and actions, like some kind of love sniper.

Obviously, they all receive equal helpings of big squashy cuddles whenever I can get my hands on them (and when they’re not back-chatting), and they will do until they are 102.

I’ll always be fair, and they will always be equal, But I’d like to stop treating them the same.