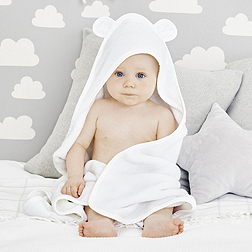 Picture credit: The White Company (not a sponsored post)

What do you say to a new mum without giving it all away? After “congratulations!” and “she’s gorgeous!”, how do you not launch into “isn’t it awful?” A woman with a new kid needs to be treated with kid gloves. Tip: Treat her as you would a baby chick.

Offer to make her a cup of tea / buy her a coffee and give her a glass of water. Nothing is more parching than breastfeeding, and whether you’re breast or bottle, new mums never get to enjoy a hot drink. And offer to hold the baby while she drinks it, but only if she wants you to – after giving birth to the most precious thing in the universe, new mums are surprisingly proprietorial.

Don’t expect her to be listening. Try as you might, as a new mum, focusing on actual words is almost impossible when you’re knackered and trying to deal with the baby. This may make all the rest of this post irrelevant, but just in case she is listening…

Talk gently and slowly, as if coaxing a kitten. She gets enough volume in her ears from the baby and sleep-deprivation makes us all fragile.

Tell her she looks amazing. Never mind that she’s pale as the grave, her whole butt is hanging out her maternity jeans and her hair hasn’t been washed since the birth, a compliment will give her the lift she needs, nay deserves!

Ask her about her birth story, but don’t compare. People can’t help themselves. If you were in labour for 36 hours, they were 48. If you popped yours out in the hospital carpark with little to no warning, they gave birth on the motorway. Everyone’s story is different – and sacred.

Don’t give her the fear. Parenting is done – thank God – one step at a time. The next step should be on a “need to know” only basis. Refer to your older child/ren as though they are basically bigger, sleeping-through-the-night-ier versions of their tiny bundle of cute.

Focus on the positives. The nights may be awful, but isn’t he good in the day? Her head might be a bit wonky from the delivery, but look at her beautiful eyes. Today was a bad day – but at least it’s another day done and you’re closer to Sleep-Through Land.

Don’t belittle her worries. You cannot even see the rash she is worried about, but you must agree she should ask the health visitor about it. If her baby’s last nappy was a bit loose, that is a valid concern – forget all the poonamis you’ve dealt with over the years. Her baby wakes every two hours? Oh, yours never slept at all! Just wait till they’re teething! Try and lay her worries to rest if you can, of course, but she probably won’t be appeased unless you’re a doctor.

Answer questions honestly. Ish. “When did yours sleep through?” is the classic from an exhausted new mother looking for hope. Laughing: “Oh, they’re still not!” when you have older children is not welcome. Equally, “from 3 days old” will make her want to punch you. Grabbing two handfuls of your stomach when she asks “how long did it take to lose the baby weight?” is probably less helpful than assuring her that it will happen, just not straight away…

Coo over the baby. But don’t call it big. Or small. Size is a sensitive issue. Praise every little bit of him or her, but avoid speculating over whether s/he has a “touch of the ginge”. (My eldest has fiery hair and I love it, but some people don’t thank you for ginge-spotting.) Safe areas include: eyelashes (long, curly, beautiful etc), fingers, toes, cheeks, ickle hands and diddy feet. And do her a favour and tell her the baby looks like her (even though it totally doesn’t).

Don’t offer advice. Every fibre of your body is screaming to download everything you’ve learned the long, bitter, hard way about babycare, but hold it down! Even if she asks for advice, 99% of the time she means she wants you to validate what she is doing. Do so. If she’s attachment, don’t go Gina. If she’s co-sleeping and you had yours in his own room at two weeks, let it go. Obviously, you will have gems to impart on most areas of child-rearing, but present them only when pressed, and as mere options. Don’t confuse the poor lass.

Be alert to postnatal depression symptoms. But don’t put ideas in her head. If she’s a bit tearful from a bad night, suggesting she might have PND might send her into a whole spiral of unneeded anxiety. But, of course, if you do suspect she is not herself and may be suffering, gently suggest she talk to her doctor.

Don’t take the shine off. Yes, she should see what they’re like at eight, yelling at you and hitting their siblings. But not right now. However jaded you are about the whole parenting thing, don’t let it show.

Don’t miss the opportunity to hold that teeny tiny baby! They grow so fast…But don’t say that either: remember how each day felt like a year when you were awake for 22 hours of it?

Give her a big hug and tell her she’s doing an amazing job!