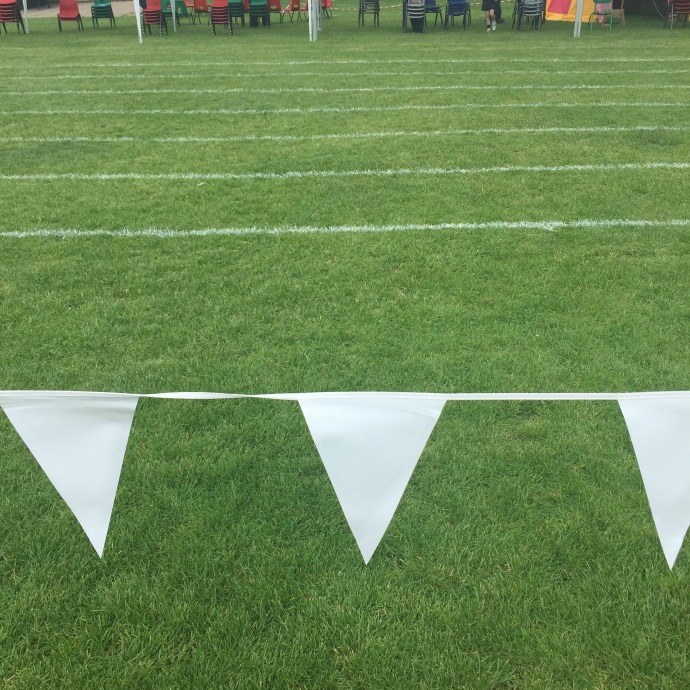 Sports Day. Scene of competitive parenting across the land. We tell our children it’s the taking part that counts, but don’t we secretly want a raft of 1st stickers? So what do you do when your child won’t even leave the starting line?

My child is a fast runner. He’s agile. He’s fearless. In our own garden. The park we go to all the time. On the fallen tree they like to climb.

But at Sports Day, he froze. It was his first ever sports day, at pre-school. The first race, a simple run to the end of the 30m track. A distance he covers many times a day.

But not in front of a crowd. Not with all the teachers watching, all his class, his big brother and his class, and a whole flank of parents on the other side of the track.

The starting signal went off. I can’t remember if it was a whistle, a shout, or what. All I can remember is my baby, walking along the track, his head in his shoulder, his hand held by his lovely teaching assistant, all the way to the end.

He cried all the way back to his classmates.

I felt like a sound boom had gone off and time had stopped. I felt everyone was watching me to see my reaction.

On one side, those who think children need to learn, they can’t be allowed to give up just because they don’t like something. All the other children were joining in, so why couldn’t he?

On the other side, those who wouldn’t make their child do anything they didn’t want to. Who think they’re too young for competition and discipline.

In the middle, me. Wanting to bring up a resilient child. And needing to take my four-year-old child up in my arms and make the world go away.

In slow motion, I flung the baby at a friend and ran round to the schoolchildren’s area – an action strictly forbidden in the welcoming notes. I asked if I could take him with me to the spectator side. Whether I should?

They said, try one more race.

So, flustered and dazed, I agreed.

When it was his turn again, I saw his anguish immediately. I ran over and asked if he’d like me to do the race with him. He nodded, but the whole way along he was palpably shaking and his head was bowed pitifully. Without consulting anyone, I swept him off to sit with me and spent the rest of the day trying to calm my terrified little boy.

I am open about my competitive streak – last year I wrote about how to win the mums race at sports day (as I did at my oldest child’s sports day). I’ve also joked about being a meerkat mother – like a Tiger Mother, but more cuddly.

I’m still competitive, as anyone who’s played Christmas games with me will testify.

But all that evaporated when I saw my son in tears. I didn’t care about winning, I just wanted to get him off that track.

That was last year.

This year, I arrived at Sports Day with some trepidation. My child has grown hugely in confidence this Reception year, thanks to his fantastic teacher and teaching assistant.

But I was still worried that the curse of the starting line would strike again. He’d enjoyed the practice races in PE, but how would he cope with so many mums and dads watching, plus the rest of the school?

His turn came, and he lined up with five of his classmates. They all looked so little. He gave me a little wave as I stood smiling encouragement from the sideline. The starting whistle went.

No tears, no help, no hesitation.

And what was really the cherry on top – he won!

As he ran back to his class, his little face was bursting with excitement and pride. Just as my heart was.

I wouldn’t have cared if he’d come last – really and truly. I was just so happy he’d found the confidence to participate.

Is your child a pro athlete when it comes to Sports Day, or does s/he hate the pressure and crowds?